Tree Farm License 46 (TFL) is 59,432 hectares in size and was granted to The Teal Jones Group for exclusive harvesting (logging) on public (Crown) land by BC Ministry of Forests. TFL 46 is located on Vancouver Island, north of Port Renfrew and southwest of Cowichan Lake.

Hundreds of people have arrived to protect the old-growth temperate rainforest of Vancouver Island after the British Columbia NDP Government lead by Premier John Horgan failed to follow through on election promises that would significantly reduce logging of ancient forests.

Ada’itsx/Fairy Creek watershed remains intact and pristine in the midst of many logged-out valleys on the southern region of Vancouver Island. This is the un-ceded territory of the Pacheedaht people who now live near Port Renfrew. Fairy Creek appears to be the last watershed remaining in its natural state after 150 years of industrial logging! Less than 2% of old-growth is standing on Vancouver Island and most of that is fragmented by logging that has converted these forest into tree farms. The ancient temperate forests growing on Vancouver Island have been logged since Captain Cook first arrived to repair his boats in 1778. Yet, these forest territories remain un-ceded by First Nations, which means that these ancestral lands have never been legally surrendered. Still the BC Government continues to grant timber rights to logging companies with Tree Farm Licenses. As a result the vast majority of ancient forest watersheds in the southern region of Vancouver Island have either been completely logged or had their integrity as intact ecosystems destroyed by logging.

Climate Change is on many people’s minds and the scientific facts confirm that old-growth take carbon dioxide out of the air and pump oxogen into the atmosphere while storing carbon and stabilizing weather patterns. Therefore it makes absolutely no sense to cut these beautiful old-growth forests down. They are worth much more standing in all sorts of ways! Economically, Environmentally, First Nation’s Spirituality! Future generations must have a chance to experience Temperate Ancient Rainforests and the only way to have that happen is for the LAST STANDS of old-growth to be protected in perpetuity. We want to leave something of a legacy for the kids and grand kids.

After 7 months of blockades that effectively stopped logging road building into the Fairy Creek Watershed the B.C. Supreme Court granted Teal-Jones an injunction to remove protesters. The legal question that lead to this ruling is the same as that asked at many logging blockades of the past: Was the logging company given legal access to the land by the BC Government?

[74] The protestors have serious and passionate concerns about the environment. There is no doubt that climate change is real, and poses a grave threat to humanity’s future. The Supreme Court of Canada has said so just a few days ago: Reference re Greenhouse Gas Pollution Pricing Act, 2021 SCC 11, at para. 2. But as I have said, the effect of old growth forest logging on climate change and biodiversity is not before me, and is not for me to say. [75] What is at stake in this Court is the maintenance of law and order and respect for the rule of law. The protestors are free to protest, demonstrate, and attempt to influence the government in any lawful way they may choose. But no one has the right to disobey a court order, no matter how passionately they may believe in their cause.

************************
All other arguments are mute about Ancient trees, Climate Change, Indigenous Land Rights, Destruction of Ecosystems, Endangered Species etc… since these issues can not be considered by the judge because these concerns do not address the only legal question being asked of the court. The laws and the court system that upholds them need to be changed to reflect the will of the people living in the province of British Columbia. The people protecting The Fairy Creek, Harris Creek, Walbran Creek, and Caycuse Creek Watersheds are standing their ground to stop logging and they face arrest for values shared by the vast majority of British Columbians and others around the world.

THIS IS THE LAST STAND for Ancient Forest represents all ancient forests growing on public land that are or will be on the chopping block by the British Columbia NDP Government lead by Premier John Horgan. 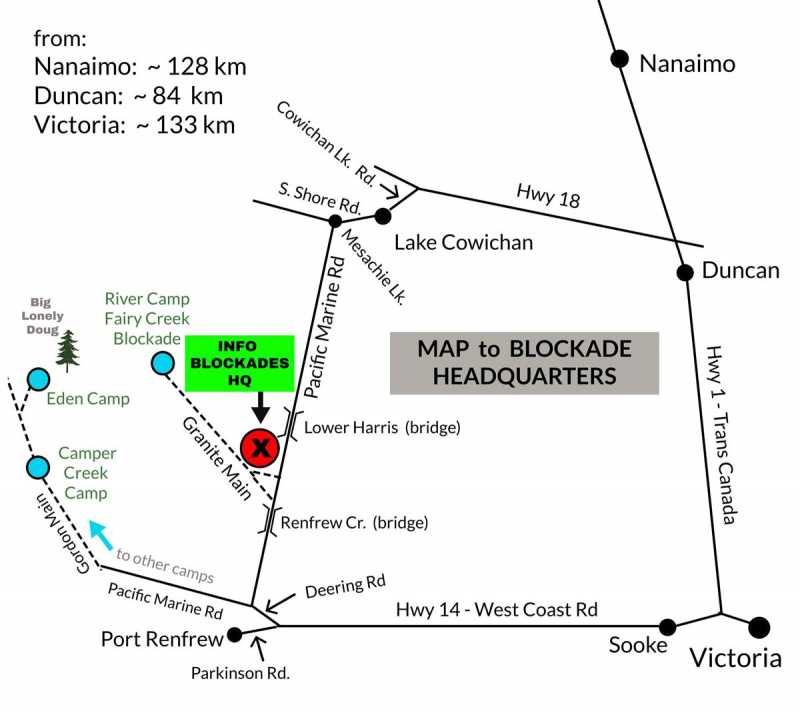 STAY TUNED FOR MORE IMAGES, VIDEO, and TEXT on this important situation.